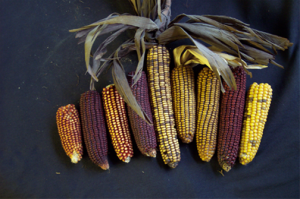 Background
This database contains field corn germplasm only.  It does not include patented nor PVP-protected sweet corn or popcorn germplasm.

For purposes of this database, heterotic groups have been classified into 5 categories:

Heterotic groups are often somewhat subjective and prone to exceptions, not unlike higher order botanical species classifications.  For this reason, more extensive and detailed classification of families and/or sub-families has not been provided in this database.  The classification listed for individual maize inbreds is based upon analysis and interpretation of data obtained from published patent and PVP documents.  Analysis and interpretation of published data were performed solely by the authors of this database, and to the best of their abilities.  No warranty or guarantee of the absolute accuracy of these interpretations is provided or implied.

Patent maintenance fee neglect
On October 4, 2016, the entire database was updated to identify hybrid, inbred, and synthetic varieties for which patent maintenance fee payments had been neglected by the patent holder.  The US patent office requires a maintenance fee to be paid by 4 years, 8 years, and 12 years (including 6-month grace periods) following the issue date of the patent.  If these fees are not paid by the end of any grace period, the patent is deemed to be expired.  The CPIS database now reflects all fee neglect patent expirations as they occur.

Variety names
Occasionally, the same corn inbred variety has been assigned different names by the inventor/developer for PVP certification vs. patent protection.  Where identifiable, these variety names have been consolidated as one variety entry in the database.

Some inbred varieties have been patented two or sometimes three times by the patent owner.  Such inbred varieties are identified by a (n) suffix immediately following the name of the variety.  A (1) designates the first patent; a (2) designates a second patent application and issue at a later date; a (3) designates a third patent application and issue at yet a later date.  If the patent of an inbred variety possessing a (1) suffix has expired, the inbred may still be under protection via a second or third patent.  If no (n) suffix is present, the inbred variety has been patented only once, though it may still be under protection of a PVP certification.

Where backcrossing was identified in the development of the corn inbred, > or < are used to identify which parent was used multiple times (recurrent parent) in the crossing scheme.  Again, the female parent (of the final backcross) is listed first.  The male parent (of the final backcross) is listed last.  The symbols >n> or <n< are used to indicate the direction and recurrence of one parent in the backcross scheme.  For example in the development of inbred Y, D<3<E indicates that E is the recurrent parent used a total of three times (including the original cross) to develop the backcross population from which Y was developed, and D was the female of the final backcross.  In this theoretical example, Y is expected to possess a nuclear genetic background consisting 7/8 E and 1/8 D, and a cytoplasmic background of D.

Please note that patent and PVP information is available only for germplasm for which patents or PVP certificates have been issued.  If a variety patent application was submitted but is still pending, or was later withdrawn or abandoned before the patent was approved and published, the variety is not included as an entry in the database.  If PVP applications are still pending, they also do not contribute to this database.  Also, note that some information for some varieties was not possible to derive from the published literature, nor from subsequent data analysis.